EDITOR'S NOTE: In a country with staggeringly low literacy rates, most education in Haiti is in the form of oral recitation. And in a country with poverty and pain far deeper than human comprehension, Haitians often talk in parables. Storytelling is the country's heartbeat. This three-day series, which started Sunday and concludes Tuesday, tells three modern-day parables of a group of Boulderites and their attempts to help save a country that, at times, seems 200 years beyond redemption. This is the tale of the Colorado Haiti Project.

Pat Laudisio isn't there when the voodoo prince selects the goat for sacrifice.
She can't see its eyeballs bulge when the machete blade sings across the rocks as it's sharpened. 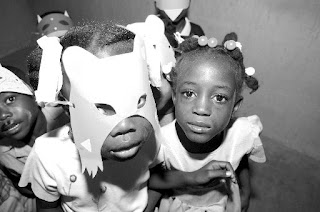 Laudisio doesn't see how the voodoo priestess's fingertips curl seductively through the acrid humidity, or how the priestess's fat stomach quivers with her chants and the throbbing drumbeats.

But if Laudisio squinted just right, she could see the smoke oozing through the trees about five miles away, and she would know.

Laudisio, whose family is well-known in Boulder as high-profile restaurateurs, knows about voodoo. She's been to Haiti a dozen times. She was the first executive director of the Boulder-based Colorado Haiti Project, from 1999 to 2004.

Over the past 18 years, the nonprofit built the St. Paul's Mission near Petit Trou de Nippes, Haiti. The mission includes a school, church, guest house and rectory, symbolizing the project's comprehensive approach that spans education, spiritual growth and health care.

The approach is unprecedented in battling Haiti's poverty. Most nonprofits focus on one area, such as medical care. But this project has created a tiny oasis of hope along Haiti's rocky road of decay. It's a holistic model volunteers dream can be replicated a million times throughout Haiti, since that's what would be needed to truly breathe new life into this country. But a cluster of cement buildings is all the project can do. For now.

The plan orbits around a church: a community gathering point. God's presence. The fuel for superhuman strength - since that's also what is needed to breathe new life here. This spiritual support is Laudisio's focus. She is in Haiti mid-February with three other Boulderites, including her husband, Antonio Laudisio.

Voodoo seems to be the only thing Haiti has in abundance. That, and desperation.

The country, just an hour and a half by plane from the United States, feels medieval, lacking clean water, a sewage system, jobs, schools - even soil rich enough to grow food. Haiti is the third-poorest nation on the globe.

Some say to compare the poorest conditions of Africa to Haiti is like comparing prison to death. Haiti has virtually no tourism due to its destitution and lack of even a Third World infrastructure. Visitors mostly come to help, and residents would risk life to escape to become a Miami vagrant, a much cushier lifestyle. 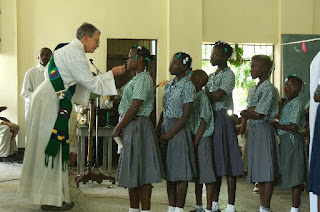 St. Paul's feels misplaced, blooming with new construction and optimism. Its church is the second-largest Episcopal church in the nation, even though it is six hours away on a roller-coaster mud road south of the capital, Port-au-Prince.

The plot lay naked when the first volunteers visited in 1989. The land blended in with the rest of the Petit Trou oblivion, without even a water well.

Pat Laudisio is a deacon from the St. John's Episcopal Church in Boulder. She prefers to respect the voodoo ceremony from a distance. The smoke coils around a metal prong plunged into the flames, before it exhales into the sky looking like the spirits it's supposed to summon.
Maybe it's summoning the spirits of the living, too, a reminder to look beyond the disease-infested bugs biting at their ankles and toward a faith that could carry them.

She has her own ceremony to run.

It's hot. Beyond hot. The air feels like fire, accentuated by the haze of incense that the priest shakes from a brass ball on a chain, the thurible. More smoke.

It's Sunday morning inside a sweltering furnace called the St. Paul's Episcopal Church. People walked miles. Some joke they come to service just to plug in their cell phones, even though most phones don't work. Locals carry the black boxes as a status symbol, much like Americans and their Starbucks cups. The church has power from a generator that works most of the time. Nests of power cords coil around the already overburdened electrical outlets.

But truthfully, the residents' dignified hairdos and attentiveness - despite the heat - indicate that this weekly ritual is a place to recharge more than just phones.

The children, dressed in matching school uniforms, gawk at the visitors, gently and curiously, but look down when noticed. Maybe they know their destiny is already decided, being born in the wrong latitude. Maybe they're being polite. Mosquitoes also came to church this morning. They came for their feast.

Father Kesner Gracia explodes at the podium, preaching in Haitian Creole. Kesner, the archdeacon of this region, oversees 35 churches and is the Haitian head of the Colorado Haiti Project.

Ninety percent of Haiti is Catholic. The remainder are Episcopalian. Locals say 100 percent are "voodoo." 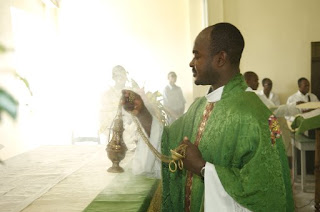 Kesner, 33, is well-built, but he strains to hold up his shoulders under a heavy green robe. More people pack in. Capacity is 500. Standing room only. More mosquitoes and waves of humidity follow them. Kesner's volume increases with the growing audience.

Down the road, the villages look like they are
rotting. Flaking pink and green doors pop from buildings made from hunks of lumber and tin. They're half built, or maybe half deteriorated.
The name Haiti stems from the "land of mountains." Hills that were once lush are now stripped of green, the trees plucked out for charcoal mining, one of the few economies that is still lucrative. Clear-cutting led to erosion. The raped mountains now gradually slip into the bay.

Anyone who's been here can hardly dispute that Haiti is at the bottom. The quality of life cannot get worse. The only step down is death itself.

Miles and miles of the same: processions of anguished faces pushing forward, selling anything they can think of: sugarcane sticks, broken TVs, bread soggy from the dirty rain. One man simultaneously sells windshield wipers and cell phone chargers. For a country without money to buy cars or functioning cell phones, his commodities are baffling. But there's a spark of energy. Haiti is abundant with persistence, despite meager returns.

Back in church, it's Laudisio's turn.

She speaks slowly to the congregation in English: "When I see your eyes and hear your singing and see you all moving together, I know you have a lesson to teach all of the world: The grace and love of God, for he is truly present here."

"The problems that exist in Haiti exist in all parts of the world today, " she says. "Haiti is running out of time and space and resources, and if we don't pay attention to the causes of the poverty in Haiti, ultimately it will continue to grow in the rest of the world."

The church drums crescendo. Twelve young girls float down the aisle. Their callused feet caress the cement in time, slowly and softly enough to not disrupt the plastic baskets of hibiscus blooms, eggs and coconuts tottering on their heads. Step left. Step right. Slowly spin. They offer the baskets to the altar, as carefully as if laying down a sleeping infant.

They cannot give money, but they offer what they have. 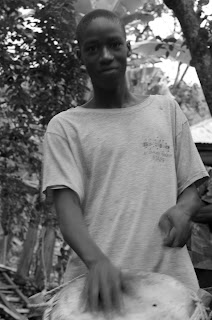 It's the Haitian proverb: "If you have nothing to give, give a piece of your heart."

So different from a decade ago, when missionaries tossed balloons and candy from their moving vehicles at the Haitian children, like a pity parade. They thought they were helping, but the random giving stirred a sense of dependency and emptiness.

The Colorado Haiti Project now expects the residents to reciprocate, whether it's voting on the next venture or keeping the grounds clean. The nonprofit's goal is to some day not be needed. Laudisio thinks the girls' offering dance mirrors a shift in perspective.

"There is a joy in understanding that they can be full participants in a growing community. They can make their own contribution that comes from their singing, their movement, their dancing together, " Laudisio says. "It's empowering to give something."

Even when the gift isn't something tangible, she says. Especially then.

And it's true for the American volunteers, too, although that's tricky to remember coming from a material nation, where the price of a few pairs of running shoes could feed and educate a Haitian child for a year.

Just this morning, another Boulderite, Leslie Sosnowski, said she wished she brought 650 suckers or bouncy balls, one for every child in the school. But she didn't.

She saw a boy standing alone near the water collection tank. He motioned, palms up and pleading. His hollow cheeks and eyes said he was dying. Sosnowski had a few Power Bars left. She could have slipped him one. It was tempting. She went back and forth, tortured by the tension between her big heart and the impossibility to help every child she saw. She knew if she gave this boy something, she was excluding 649 others.

Instead, she shared with him a smile, a commodity that she hoped would be contagious and have a longer shelf life.

The dimension of redevelopment that resonates deeper than the physical is easy to miss, Laudisio says. But the church building without the community inside is just another forsaken shell on the road.

The spirit of a nonprofit is the small, still voice inside, she says. Beyond a particular religion, Laudisio says a community of faith unites people through common values, the spirit that ignites when people focus on something beyond themselves.

This spirit is like the smoke, whether at a voodoo ceremony or an Episcopal church, that crawls from the altar into the air and slides into our lungs. It's inside us, even if we can't feel it.

"I believe that God exists within each human person and every living part of this creation and that we are drawn toward one another because God calls God's self, " Laudisio says. "Sometimes that call becomes more intense through people who are experiencing suffering ... and we respond to it, and it is a light and a depth and a wisdom and a joy."

The spirit pushes the Haitian merchant's bare feet one in front of the other as he waves windshield wipers and cell phone chargers, hoping to score a sale.

It's what draws Pat Laudisio back to Haiti year after year, even when the magnitude of the project seems heavier than a mountain.

"We are larger than our little selves, " Laudisio says. "Love exists. That's the way we will survive."

Coming Tuesday: Addressing the health of Haiti.
Contact Camera Staff Writer Aimee Heckel at (303) 473-1359 or heckela@dailycamera.com.
Posted by Me at 2:25 PM