EDITOR'S NOTE: In a country with staggeringly low literacy rates, most education in Haiti is in the form of oral recitation. And in a country with poverty and pain far deeper than human comprehension, Haitians often talk in parables. Storytelling is the country's heartbeat. This three-day series, which starts today, tells three modern-day parables of a group of Boulderites and their attempts to help save a country that, at times, seems 200 years beyond redemption.
This is the tale of the Colorado Haiti Project.


Leslie Sosnowski is done with fear.

At least that's what the letter says. She reads it to the sounds of the growling airplane engine as it carries her to Haiti, the poorest nation in the western hemisphere. She reads it there, in the darkness of night when she can't sleep after 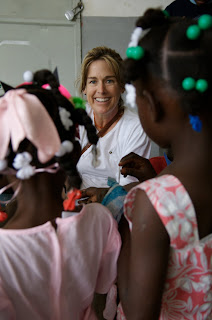 she swears something crawled across her neck. She reads it when she wants to scream.

The loopy handwriting of her 10-year-old daughter, Sara, strings together the pieces of Sosnowski's heart every time she sees a Haitian child lugging water instead of studying, and every time she silently wishes she was home and comfortable in Boulder.

Before leaving for Haiti on Feb. 16, the 50-year-old full-time mom thought she'd prepared for the end of the world - and, in a way, that's what she would find during her week in Haiti. She packed a fan, face creams and a yoga mat. Yet the one thing she didn't pack herself, something her daughter had scrawled in Sosnowski's journal the night before, was everything she needed.
Sosnowski carries another note from her daughter, too. But it's sealed in an envelope and not addressed to her. Sosnowski doesn't know what it will say.

Sosnowski sits on the cool cement outside a classroom at St. Paul's Mission. This is Colorado Haiti Project territory: A tiny oasis of hope wedged between poverty in every direction. Four buildings, a school, church, a guest house and rectory, represent nearly 20 years of fundraising and construction.

The stillness here is jarring, surrounded by chaos. In this country, mothers swathe their infants in plastic bags so they can place them on the sewage-smothered ground while they cook and try to clean their huts. In the finest straw homes beyond St. Paul's, residents alternate sleeping on their one mattress in one- or two-hour shifts, hoping not to be joined by malaria-laden mosquitoes.

Sosnowski thinks the half-built school looks like a prison.

But this is not a story about buildings. It is about rebuilding. It's what happens inside the buildings.

And inside, St. Paul's buildings bring education, spiritual support, medical care - a pyramid of rebirth for a nation that appears, by all standards, long dead and decayed. The island floats just an hour and a half by plane from Florida, but it's 200 years behind. Eighty percent of the country lives in abject poverty. 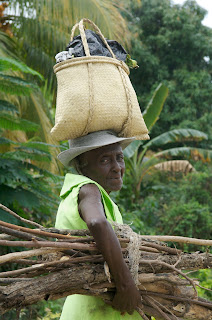 Haiti's problems are complex, tangled in a history of slavery and political instability. The lack of solid government has resulted in near anarchy. So most nonprofits take on one task, such as running a school or offering free medical care.

But the Colorado Haiti Project is trying a comprehensive approach for this one village, near Petit Trou de Nippes, 80 miles south of Port-au-Prince, the capital. The Boulder group is the only nonprofit ever to attempt such a vast reincarnation for Haiti, even on a small scale. As they see it, all aspects of what they are working on - education, medicine and spirituality - weave together.

The humidity sneaks through the barred windows at St. Paul's School. The air is so heavy that it steals Sosnowski's breath. Or maybe the entire island leaves her breathless, because it's desolate enough to take anything it can get.

The cooks shoo chickens out of the kitchen. Rice and beans are cooked in an outdoor cauldron over a fire. The showers entail a pipe sticking out of the wall, a knob, the force of gravity and a water tank on the roof.

Sosnowski is one of four Boulderites on February's mission trip, designed to check on the program, assess community need and help determine direction. Sosnowski runs the scholarship program to help the children get an education, since Haiti has no free schools.

But really, Sosnowski's trip can be defined by two letters.

She hopes if she reads Sara's letter to her enough times, it will become true:

Sosnowski decides now she must be done with fear, now that she's seat-belted in Father Kesner Gracia's Nissan. She locks the doors. Extra safe for the ride through the city. 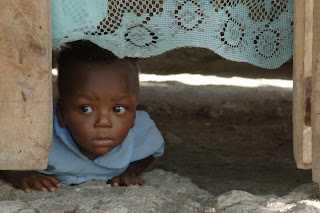 The car stands between her and a city that looks like a disaster zone that forgot to wear its yellow "Police line: Do not cross" banner. It's alive, a city that does not breathe, but pants.

Every turn is punctuated by mountains of trash, open sewers, desperation and sporadic but proud political graffiti marking the 1-year anniversary of one of the country's first democratically elected presidents.

Beyond Sosnowski's windows, people burst with every gesture. The echoes of their words reverberate in a hollow hum from tin roof to tin roof.
Sosnowski jumps. A weathered hand slaps her window. It's connected to an old woman, who loses footing as she wades through the crowd and crunches across glass and wrappers that float through the streets like fall leaves back in Boulder. The old woman balances a rusty metal tub of bananas on her head. The threads that cling to her bones clash with her poise and her noble jaw. Her eyes hit Sosnowski's. She looks away first, too quickly to see the woman's glare melt into a toothless smile. The pride of Haiti.

Sosnowski is not done with fear.

Sosnowski wonders if the car is symbolic of her life in Boulder: a false sense of security through physical separation. Just one rock or flat tire away from havoc.

One week earlier, the United Nations sent in extra forces to Port-au-Prince. Kidnappings for ransom are common. One teen was recently kidnapped and murdered, her eyeballs gouged out.
"They say that Haiti has collapsed, " Sosnowski says. "It has."

Ten-year-old Sara wants to go to Haiti this summer. The youth group from St. John's Episcopal Church in Boulder wants to build a playground here. Sara signed up.

Sosnowski isn't sure her girl can handle it.

Sara carries a photo of her 5-year-old Haitian pen pal, Rosemie Fleory, and shows it to her friends at the Boulder Country Day School. Sara's enthusiasm inspires others to sponsor Haitian students. Before Sosnowski left, her daughter watched the Colorado Haiti Project's documentary on repeat.

"The level of poverty she sees in 'Haiti Calls' either doesn't register with her - or deter her, " her mom says. "I think she hears Haiti calling in her heart."

Well, she hears something. Only right now, it's muddled in fear and the swirl crinkling paper and voices. Sosnowski perches on a splintered bench outside St. Paul's Women's Resource Center.

The center opened in the fall with 60 students, young women eager to improve their cooking and sewing, and hopefully, their lives. This fall, the center will offer them business classes and micro-loans to start their own shops.

Sosnowski's white skin glows in a crowd of Haitian children, like the Haitian's white teeth glow against their lips. The children hover over pages from a coloring book that Sosnowski packed, stroking the pictures with markers as carefully as if they're performing surgery. Any kind of education is their life support. Fewer than half of the nation is literate.

Education will help bring the nation back to life, Sosnowski says.

More than half of the country's population is younger than 20. Of these 4 million youth, fewer than half attend school.

But around St. Paul's, 88 percent of girls and 85 percent of boys are enrolled in school, a survey found. In 2005, the Haitian government recognized the St. Paul's School as one of the best primary schools in the nation based on its exam scores. Then, the school had no classrooms.
Classes were held under trees or in corners of the church.

St. Paul's School is out this week for Mardi Gras, but children still buzz around the classrooms. The school provides more than 600 children lunch - sometimes their only meal. A quarter of Haitian children suffer from chronic malnutrition.

Sosnowski told Sara she could sponsor the Haitian girl if Sara worked to earn the $300 it would cost annually. Sara's household chores put Rosemie through school, buy books and a uniform and provide her with lunch. When Sara doesn't want to clean her room, Sosnowski reminds her of Rosemie.

Sosnowski snatches up Rosemie's envelope and crackles across the white gravel. The child stands barefoot, awkward and tiny in the courtyard. Rosemie's face is empty. She wears her gingham uniform with her name sloppily sewn on the pinafore.

The crowd slides back as Sosnowski passes, her steps narrow and abrupt under her long khaki skirt. Bodies turn to watch, like sunflowers craning their hungry faces toward the sun.
Today, Rosemie is the sun. Or better. Rosemie is a movie star getting her first Oscar.
Sosnowski hears the engine of the Nissan choking closer toward the mission site. It's time to go to the village. Her exchange is quick. Anticlimactic, even.

Like the school facility from the outside, it seems simple. But look closely; this is about what happens inside.

First, Sosnowski translates Sara's letter into French: "Rosemie, your eyes twinkle with pride. Your smile is as pretty as the sky."

Then it happens. Rosemie's eyes twinkle. Her cheeks stretch toward the clouds. 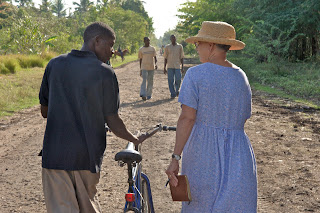 The Nissan rumbles up next to Sosnowski. The other volunteers beckon to her through the glass. She's standing on the outside, separate, and for the first time since she landed, she can hear the calling that drew her to Haiti.

It's unsettling and transforming. It is beauty borne of chaos, not just for this country, but inside her. It's the love underneath Sosnowski's fear. Sosnowski is done with fear.

Chelsea will love it here.

Sosnowski waits a minute before climbing in the car, savoring one moment more of the incongruent anxiety.