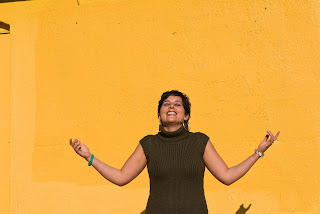 What hurts so much isn’t just the loss. Doctors said she only had a 20 percent chance of surviving five years, and she gave her loved ones three years — each its own miracle — to say goodbye.

What hurts the most is the hope.

Despite the mourning — nearly 800 readers across the globe have blanketed her blog with tears, not to mention the hundreds of loved ones across Boulder — Deandra Trevino Salem’s story is not a sad one. It is a love story. Until her last breath.

It’s Friday afternoon, July 16, and Luke Salem hasn’t slept. The 1999 Fairview High grad keeps apologizing for losing his train of thought, as if staying up all night with his wife isn’t enough of an excuse.

“When she’s having that kind of pain, she doesn’t go to sleep,” he says.

Deandra was only 27 when doctors found a 7 1⁄2-inch mass on one of her ovaries. Assuming it was benign,she went into surgery to remove it. She woke up to learn she’d had a hysterectomy. Deandra had late-stage ovarian cancer.

Luke looks at the woman he fell in love with 10 years ago — his high school sweetheart — and he
remembers her long black hair and intense dark eyes, softened by freckled cheeks. Those eyes and skin are now yellowed with jaundice, signs of liver failure. The freckled cheeks are hollow with hunger, since doctors prohibited her from eating or drinking.

“It’s so surreal. I’m here, in theory, but it’s like I’m on the outside looking in,” Luke says. “Is this really happening to my best friend, the love of my life who I’ve been together with 10 years? Is this it?”

Luke swallows hard, remembering when the doctor told them that this would happen. Deandra shook her head.

"I will beat this disease,” she often said.

She said it on her blog at Carepages.com and in her “Living with Cancer” column in Women’s Magazine.

And she did beat it.

A colostomy. Fluid in her lungs. Doctors kept thinking it was the end, but Deandra matter-of-factly said, “No.” From bed, she signed papers to expand and relocate her shop, the West End Salon. Until she couldn’t open her eyes, Deandra conducted business on her phone. The salon was more than a distraction; it was her passion.

"I am still here,” she wrote. “It seems as if I am not following the usual path of Hospice patients. I was born more a leader versus follower.”

Doctors stopped her chemotherapy, but she refused to talk about end-of-life care. Instead: “It has looked bleak before, but I’m a fighter, and I want to live.”

As always: “I am going to beat this.”

In May, doctors said Deandra wasn’t strong enough to leave the hospital. Soon she was back home. Instead of wallowing, Deandra picked out paint colors for the walls in her salon.

It would have been easier to resign, but she made up her mind that she was never going to look at her family and tell them she was giving up, said her friend Marissa Scarborough.

“She loved them too much to do that,” Marissa said.

Deandra remembers the day she was diagnosed. All she could hear was Luke crying. She didn’t expect him to stick around.

“It’s a lot to ask of someone when they have their whole life ahead of them,” Deandra wrote.

Seven months later, Luke was on his knee in Las Vegas asking for her hand in marriage. They said their vows in Hawaii one year ago on June 20.

Maybe he thought that if she were his wife, he would never lose her, she wrote. Or maybe, she wrote, it was just pure love.

Watching the fire in your lover’s eyes fade is something Luke cannot explain. He alternates between anger, frustration, desperation, optimism and awe. Mostly awe.

“It’s been like nothing I’ve ever seen, watching the odds that she’s beaten and the pain and suffering she’s endured,” Luke says. “Her ability to bounce back just blows me away.”

He doesn’t think he deserves any praise on his choice to stay. He’d never forfeit the chance to witness such superhuman strength up close, to see odds squashed, and to kiss the lips of a woman whom so many people admire.

On Carepages, Deandra’s a celebrity.

The advocacy group, Stand Up To Cancer, calls her “one of the brightest stars” in its constellation.

“And she’s my best friend. The love of my life and the person who makes me laugh like nobody else,” Luke says. “The person I look up to and get strength from. All these things I have with her.”

Anyone can see that he is the lucky one, he says.

Luke and Deandra have been trying to go on a vacation since January. The night before they were supposed to hit up Vegas, a bowel obstruction sent Deandra to the hospital. That was the fifth trip they had to cancel due to complications from her disease.

Last Wednesday, they finally get their respite. The small lake in Arvada is no Maui coastline, but when Deandra sees the water, peace rolls over her face.

“It was like her mind needed to do that before she left,” Luke says.

Back home, she begins mixing up words. She’s been sleeping a lot. Luke offers her shaved ice and ice cream. Every hour, he tells her how much he loves her and how beautiful she is. Their wedding video streams nonstop.

Luke can barely say the words; he thinks she is slipping away.

But don’t go and think that cancer is beating her, he says. Deandra chose, at that moment at the lake, to let go.

It’s Monday evening, and Deandra opens her eyes for the first time in two days. She looks at her parents, and then sees Luke and smiles.

“Are you smiling at the love of your life?” her mother, Norma Trevino, asks.

The final posting on Deandra’s blog is by her dad, Rich Trevino: “Our angel has risen.” Nearly 100 comments fill the blog within 24 hours. The second to last blog is titled, “Still praying for a miracle.”

The contrast between the hope and the loss is jarring. Yet it’s that very hope, present until the end, that Deandra will be remembered for. Hope was the gift that she gave to others.

Her face is gone, but like the love between these two Boulder high-school sweethearts, her hope is not. It is what remains. Deandra Salem’s legacy.

And in that, there is no loss.