The here and now
Life in the camp today 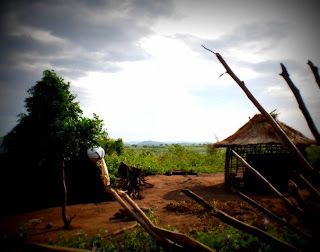 UGANDA - A bony woman shouts from a wooden hut on the side of the road.

She`s talking to six college students who are hiking several miles across the Kyangwali refugee camp to the commandant`s office.

The students, with a nonprofit called Educate, are the only white people most of the residents have ever seen or ever will. They`re visiting Uganda this summer to recruit more refugees to put through school. They`re led by Eric Glustrom, who founded the organization in 2002 when he was 17 and a student at Fairview High School. These muzungus come from Educate`s Amherst College branch in Massachusetts, where Glustrom, now 21, is studying neuroscience. The volunteers are also checking up on the 40-plus refugees Educate already sponsors with scholarships and other financial support. Most are orphans from neighboring, war-torn nations, and they say encouragement from their western friends is often the only thing that keeps them pushing forward.

The bony woman's story rushes past her lips in desperation. She's a widow, twice. One husband was a victim of rebels, the second of disease. She has two children and wants to go back to school. She only has a fifth-grade education, though, and her unruly hair is graying.

The English language - and a history of suffering - is the thread between the camp's various tribes and nationalities. The camp is divided, most notably between the Sudanese and Congolese. They use the same mud, yet even their houses look different. Their rivalry is weighing on 21-year-old Glustrom.

Glustrom's tall, blond friend tells the woman to e-mail her scholarship application. He gives her Glustrom's e-mail address, wishes her luck and walks on. She stares at the paper like it's her ticket out of here.

But it won't be. There aren't enough donations, and she's not a good investment. With only five scholarships to give, the Educate volunteers are careful to pick young, healthy people who are most likely to succeed.

The camp commandant forbids the visitors from being out after dark because of recent rebel attacks in the area. A group of insurgents hijacked a van and robbed it at gunpoint. Now taxis must travel with a police escort and only while the sun is high.

"Muzungus are a target, " the commandant says.

This commanding officer charged with the visitor's safety is a few years older than Glustrom and eight months into the high-stress job. Glustrom expects he'll quit before the year is over. Most do.

The commandant Glustrom met on his first visit in 2002 was removed from office after accusations that he'd randomly arrested, tortured and slaughtered refugees. The New York-based Human Rights Watch reported allegations that he raped a Congolese refugee woman, but he was freed by police and threw himself a party to celebrate.

The new commandant is irritated and fiddling with the tie on his suit. He doesn't appear to be as much concerned with the visitors' safety as keeping the camp calm. The visitors stand out, wearing sunglasses, reeking of bug spray and dragging name-brand backpacks. None but Glustrom have visited Africa before. They don't know what to expect.

Homes here are regularly torched. Residents report being stalked by the rebels who chased them from their homelands. Last week, one man looked up from the community waterhole into the dark eye of a shotgun. He ran. He was used to it. He survived.

As a way to rally hope in these conditions, Wereje Benson, a 23-year-old orphan from Congo, started an Educate club at Kyangwali in December. Still, Educate only has five scholarships to award this summer, and so far, Benson isn't on the list.

He describes the refugee life in a letter:

"We are people who don't know other members of our family, like parents or uncles. If you get a problem of any kind, you fight yourself. Sometimes spending days without getting what to eat. Things concerning education and medical care here, we live under God's mercy. If one is sick and cannot afford treatment, then you have to stay home waiting either to die or to be healed by God.

Now Glustrom is walking across camp to one of the biggest celebrations of the year.

His leisurely pace is nearly stagnant as he pushes gently through a sea of bodies. Some are half-naked, the dirt outlining their muscles or ribs. Others are dressed up in all of the clothes they own: plaid scarves, jackets, ski caps and startlingly clean shirts. It's hard to breathe in the dry heat and the crowd. 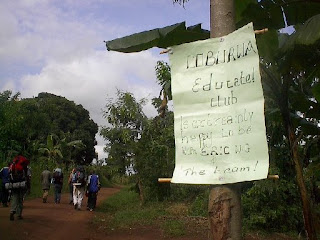 A square of paper hangs on a mango tree down the road: "Welcome to Kyangwali. I was waiting for death only! Due to imponderable problems. Lack of education. I was puzzled. Amazed. But due to Educate, I'm happy! I can smile!"

It makes Glustrom blush. The enthusiasm is embarrassing.

The signs are everywhere - not only a symbol of appreciation but also of improving literacy.

"Educate! You reinstated my senses! You unburdened my burdens. You are intending to break the circle of poverty. We love you."

"Mr. War took away our relatives, parents, brothers and sisters. I don't own a country. My names are refugee, orphan. But now!! Educate, our guardian. Eric W., our uncle. Long live Eric."

They laugh - not at the message, but that it's referring to Glustrom, their buddy with wild blond curls who jokes that his greatest accomplishments include downing seven donuts in four minutes, and a gallon of milk in an hour. A normal, funny guy back home. Not here.

To Wereje Benson, the Congolese leader of the camp's Educate club, Glustrom's visit is his only chance. Either Benson gets an education - and with it, a pass to leave the refugee camp - or he stays here digging in the fields making about one quarter a day until he catches polio or malaria. He gives himself 10 more years.

"If someone has provided education, you have stopped their death, " he says. "If you give money, you have given life. You will be someone responsible, you can help others and live much longer. I can be useful to the country. I can help the whole world."

Top schools cost less than $100 per trimester. Back in Boulder, the sacrifice would be forgoing lattes for a month or a stack of new CDs.

For Benson, that is the difference between changing the world and dying full of unrealized dreams. 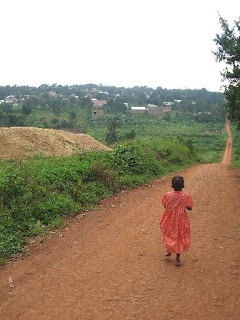 A boy pounds on a metal hubcap hanging from a tree. A baby wails. A woman addresses the crowd, but no one can hear her. In the distance, young voices sing. They grow louder. They're here now.

"Eric Glustrom is an Educate founder.

Congratulation for your gracious love.

Through Educate, you restored hope.

You rehabilitated our success in future.

Come on, join us in order to succeed.

There is a guardian known as Educate,

Our helper, to brighten our future."

"I didn't expect this, " Glustrom tells his friends. "It's a little much."

And it's just the beginning. It seems as if all 18,000 refugees who live here are crowded around the courtyard of the Kinakeitaka Primary School for "Educate Day 2006."

They perform for hours. They line a wooden table with more food than most families have seen in months - watery beans and bland dough. There's no silverware. The hungry crowd watches but smiles.

As the president of Kyangwali's Educate club, Wereje Benson holds the mic. It sounds like he speaks into a tin can.

"There is not any person who can express his happiness when he sees someone from America in Kyangwali because of you or me, a refugee who is an orphan, " he says, flailing his hands. "Who are you to bring these people here? Who am I? I cannot express my happiness because this is beyond my thinking capacity."

He continues, "We are orphans, but we're doing better because of the presence of Glustrom. This is our father. Our guardian. Our uncle. Our everything."

Glustrom's cheeks are as red as the Ugandan dirt. He doesn't feel like he deserves this. Considering the number of people he still wants to help, he feels like he's done nothing.

The assembly rolls past the sunset, when the mosquitoes and stray dogs take over the streets. It continues after the visitors fight through the masses and duck away.

They walk miles back to the church in darkness and silence, for the first time comprehending the magnitude of what they're doing in Africa.

It's 2 a.m., and 21-year-old James Hepburn can't sleep. The Amherst senior from London lies on his back on the ground outside the Catholic church where his other friends have been sleeping for hours. The stars look closer on the equator, almost within grabbing distance.

Kyangwali is simple, and in that, it's beautiful, Hepburn says. Nothing like Boulder's Pearl Street, lined with immaculate rows of flowers, high-end shops and coffeehouses.

The Kyangwali people climb trees to shake down fresh fruit for the visitors. They offer everything they have, from stale infant cookies to freshly plucked sugarcane sticks. Hepburn loves how the handshakes linger for 30 seconds or longer in Africa, where touch means hope.

Still, Hepburn can't stop wondering what's happening around him that he's not seeing.

Like the mother on the verge of tears, crawling across the dust on her knees, unable to work because of AIDS. The cholera outbreak. Too many eyes glow an eerie yellow from malaria.

It's like the snakes. Everyone keeps warning Hepburn of the green mambas, river cobras and Gaboon vipers. The residents say snakes wrap the branches of the mango trees he climbed earlier today and in the tall grass he walked through wearing flip-flops.

Yet he hasn't seen a single one.

The refugee life. It's winding through green hallways of maize, embracing the simple beauty around you, but knowing behind one of those stalks, a cobra may be sleeping.

COMING TUESDAY: The volunteers offer inspiration to the hopeful refugees - and come up with a major aspiration of their own.
Posted by Me at 4:18 PM