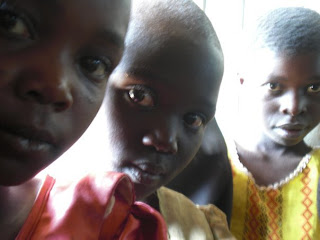 The eyes are hollow with desperation beyond anger or sadness or happiness. They're waiting - for death or for a shot at a life outside the Kyangwali Refugee Camp in western Uganda.

Twenty-one-year-old James Hepburn is trapped where the gazes converge. The British student and five American friends - all students at Amherst College in Massachusetts - are in Africa for the month of June, led by Boulderite Eric Glustrom.

Hepburn is uncomfortable. He laughs, revealing two deep dimples, which quickly dissolve below his cheekbones.

He shifts his weight between grubby flip-flops. Then he glares, unconvincingly, hoping to intimidate his way free from the stares.

Hepburn's hazel eyes give up and look away. One thousand brown eyes continue to stare. Asking, needing, hoping.

He laughs again in discomfort, but more in defeat. He's just a student. He knows he can't help every needy refugee any more than he can greet every set of eyes with his.

So he finds one pair. He meets them. He smiles.

It's a simple connection. But a simple, human connection was how this whole movement started, too - the transformation of a bustling, troubled refugee camp by Glustrom, then a Boulder teenager, and his club called Educate.

The nonprofit has stirred the refugees' dreams to some day run for president of their war-torn homelands or to become lawyers, teachers and doctors. Anything to leave the fields. It has painted a new look across the privileged western students' faces, a realization that they will never see the world in the same way.

Like most people of privilege, they arrived in Uganda unable to fathom exactly what it would take to help. It seemed Africa's problems were too immense - economically, politically and socially.

Africa's struggles seemed too big to wrap his brain around, yet years ago, as a teenager, he found a solution too simple to ignore. A tiny stone tossed into a sea of poverty and hopelessness that already has stirred ripple effects no one had anticipated.

The ripples are real. But what's needed is a financial tsunami. Hundreds of thousands of dollars.

It was the spring of 2002. Boulder's Eric Glustrom was just 17 when he asked Amnesty International to sponsor his vision to create a documentary about the suffering at a Ugandan refugee camp, a hefty concern for a kid freshly behind the steering wheel. He'd never even traveled overseas. 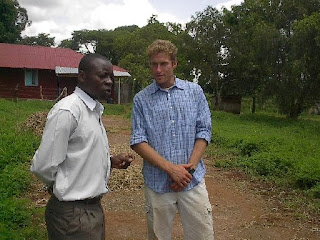 Glustrom is as laid-back as the hippies who characterize his Front Range hometown, hence his nickname, Easy E. His walk: a leisurely glide. His voice bounces with an almost ski-bum ditziness.

But Glustrom is intense when needed. On the track as a cross-country runner. In class, too. His Fairview High teachers said as a student, he "worked his guts out" to the point that he almost "erred on excess."

"He was an awesome student, funny in the way that he always did way too much work than he needed to, " said history teacher, Leigh Campbell-Hale.

No one was surprised when Glustrom started an Amnesty Club at Fairview his sophomore year; he was one of the school's few students to ever earn a perfect score on his International Baccalaureate project. The topic: peace studies.

Through the Amnesty club, Glustrom learned about Uganda's 220,000 refugees. Rwandans had fled there from the genocide of 1994. The Sudanese arrived, having escaped Christian-Arab conflicts at home. Groups fighting for control of the Democratic Republic of the Congo's mineral resources had left that country in ruin, sending a river of refugees to Uganda.

Despite Uganda's own struggles as a Third World nation, Glustrom saw it as a sliver of hope. Disaster had merged people from across the continent on one single point.

He felt drawn there, too.

Amnesty International shot Glustrom's proposal down. They said the teen was too young and his project - to direct a documentary about Uganda's refugees - was too dangerous.

This landlocked, Third World nation in eastern Africa is like another world. Diseases that long have been dormant in the United States, such as polio, run uncontrolled.

Life is like Russian roulette, with deadly diseases as the bullet. Mosquitoes carry malaria and yellow fever, and the filthy water carries hepatitis A and typhoid fever. AIDS prevention starts in kindergarten; elementary schools are plastered with signs warning: "Abstain from sex." Life expectancy is low, at 42 years, almost half that of the United States. Infant mortality rates are among the highest in the world - more than 10 times the U.S. rate.

If you dodge the disease bullet, rebel groups fill the rest of the chamber. Since the late 1980s, the Lord's Resistance Army has abducted more than 14,000 children and forced them to fight. They're beaten, raped and forced to murder. They're considered military targets. Twice abused: forced to fight and then attacked for fighting.

Despite this - or maybe because of this - and Amnesty International's warning, Glustrom remained resolute.

"I had already decided when I applied that I would do it no matter what they said, " he says. "But I hadn't told my parents this, of course."

Convincing them was the highest hurdle. Then he had to ask them to loan him $4,000 for a video camera and tickets. He figured out vaccinations. He studied the region. And he went for it alone.

He caught malaria halfway through his trip, but he completed his documentary: "Dream Deferred."

And along the way, he realized, even as a teenager, he had enough money to send one of his refugee friends - Benson Olivier, from the Congo - to a first-rate private school.

At the camp's overcrowded, government-subsidized schools, he saw one teacher wearing a screaming newborn on her back and teaching in a language the students didn't understand. Literacy rates in Uganda are low, about 70 percent, compared with 99 percent in the United States.

Less than $100 per trimester would pay for Olivier's private school - the price of a pair of shoes back home.

Glustrom could change a life.

Glustrom decided to sponsor a few more refugees. One of his friends, Vivian Lu, started a club at Fairview in 2003 to raise more money. By 2004, they sponsored 12 students.

Members of the Boulder club graduated from high school and moved away. Like Glustrom, who headed east to Amherst, the idealistic Boulder teens took Educate with them.

Today, nearly a dozen colleges and high schools across the country have branches, from local New Vista and Boulder high schools to Brown University in Rhode Island and Dartmouth College in New Hampshire.

"Educate is expanding at an incredible rate, " says Glustrom.

In its fourth year, the organization now pays for scholarships and related expenses for 48 African students, including students in Kenya and Rwanda.

There's Ruth Tumushabe, a 14-year-old Ugandan girl fully sponsored by teens at Fairview High. She wants to become a doctor.

Boulder High sponsors a 14-year-old from the Congo, Aline Dusabe, who also wants to be a doctor. She says she wants a different life than other women in her family, who were forced into marriage and "treated as property."

Back in Uganda in June, Glustrom, now 21, invited Educate's Amherst branch to check on the African students' progress, since most don't have families. With hundreds of applicants and limited funding, the scholars must excel in their classes.

"What Educate is about is not just students helping students, but friends helping friends, " Glustrom says.

Glustrom also is handing out his e-mail address to students seeking scholarships, even though some have never seen a computer. He's interviewing applicants. One thousand brown eyes. Five new scholarships to award. Five more life-changing ripples.

Only five ripples, and refugee Wereje Benson isn't among them.

This young refugee holds your hand like if he lets go, he will die.

In some ways, Benson seems older than 23. Muscles fill his blue G-Unit T-shirt, a donation. His eyes, so dark they're almost black, are lined with the stress of poverty and a life on his own. But in that, his gaze - that of an orphan - is innocent and vulnerable. In some ways, Benson is still a child.

He was 13 in 1996 when he fled the Congo. He slipped through the back window of a church while rebels in the other room killed almost everyone in his school, one by one, by hitting the children in the forehead with a hammer. Benson remembers heads hanging in the trees. He saw eight friends burned to death.

Benson doesn't know if his parents, brother or four sisters are alive. He can't go home. He fears the rebels still are active. 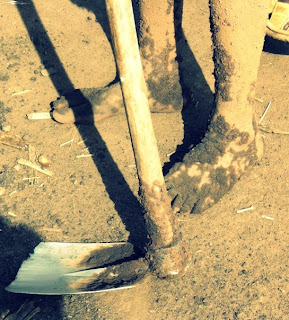 At Kyangwali, Benson tamed the field behind his mud hut with a machete and hoe, raising enough money for the shoddy refugee school, seven miles away by foot. But he failed because the cost of books and a school uniform drained his money, leaving him starving and unable to concentrate.

So he took another path. He began practicing soccer every night. For three years starting in 1998, he practiced until he became one of the best players in the region. He earned a reputation, and with it a 100,000 shilling ($55) scholarship to Kitara Secondary School in Hoima, Uganda.

But with the end of secondary school comes the end of his scholarship, and Benson wants to go to go to college and study economics. He dreams of creating an organization that supports refugees as they try to fit in with the Ugandan natives, who are often hostile to them because they're temporary residents who don't pay taxes.

In December, Benson created a similar refugee-support group, on a smaller scale.

He opened an Educate branch on the settlement. More than 100 refugees patch holes in the road and hack through fields to raise money to pay for other members' uniforms and books. When the camp cut funding for the local primary schools, the club raised $300 by digging. At about 33 cents for an eight-hour day, that adds up to about 900 days of labor. Two-and-a-half year's worth.

Many of the members are not yet sponsored by Educate and can't afford to put themselves through school.

They call their club Coburwa, short for Congo-Burundi-Rwanda, an unprecedented movement that has unified different nationalities on the camp.

Benson is the president of Coburwa.

Yet his own scholarship application still sits in Educate's stack of "not yets" and "maybe nevers."

The same suffering. A different ending.

Benson Olivier, 22, is Wereje Benson's best friend. They grew up in the same village in the Congo, and escaped death through the same back window. As orphans, they worked the same fields at Kyangwali. They even share a name.

But Olivier happened to be standing by the side of the road when a cloud of dust brought a taxi carrying a white boy from Boulder to the refugee camp in 2002. Glustrom stepped out.

Olivier offered to help him film his documentary. They became close friends, and Glustrom decided fund Olivier's education, supporting his dream to become a politician to help end the war in the Congo that took his family's life.

That's where the Educate movement began.

COMING MONDAY: The Educate volunteers encounter the desperation, high hopes and deep appreciation of the refugees they've traveled so far to meet.
Posted by Me at 4:08 PM